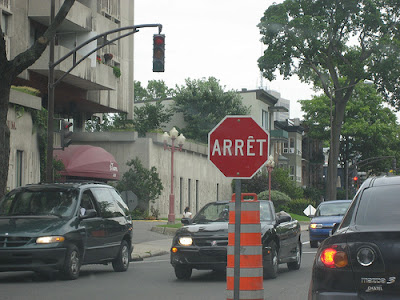 arret! and let me tell you about my trip to la ville de quebec with bean, dancer lady and artemis (check out more pictures on flickr). we drove north to canada on sunday morning, mostly alongside the gorgeous kennebec river, through tiny maine towns and past rolling hills and piney-smelling pine trees. when we got to canada (after being very briefly detained at the border because dancer did not have a letter from artemis's father stating that he was aware that his child was being taken out of the country), tout le monde a parle francais!!

(oh, mama d, did i say that right? i mean, besides the missing accents?)

part of the reason we took the trip was so that bean and artemis could practice speaking french, and they definitely got to do that. we all four made valiant attempts to communicate in the native tongue, although we were almost instantly revealed as americans as soon as someone responded to our queries or restaurant orders in rapid french. "huh?" we'd say. or the expression on our faces would say. or, if we were quick on our feet, we'd say, "um, parlez-vous anglais?" most of them did, although a couple did not (i.e. the guy in the book store who clearly loved gnomes as much as dancer lady).

we stayed in a really great youth hostel in old quebec, inside the fortification walls which surround that part of the city. 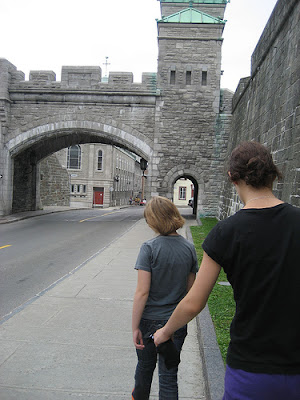 we drank excellent coffee at charming cafes*, ate delicious pastries and chocolates, walked miles of hills and staircases, browsed in souvenir shops, bookstores, record shops, and clothing stores. we went to the choco-musee and la musee de la civilisation (bean and i loved an exhibit on le cinema du quebec, where we got to watch a bunch of film clips, including one from nanook of the north). we also went to the oldest grocery store in north america and a great health food store right across the street from it. people in quebec in general were reserved and perhaps a little leery of english-speaking tourists comme nous, with the exception of our waiter, alexandre, at le petit chateau creperie, and the guy at the t-shirt shop, both very friendly. oh, also the guy at the bookstore who didn't speak english, and the guy at the fancy tea house. the city itself was unbelievably exotic -- quite european, even medieval in places, with one charming scene after another, a lovely flowing river, many gallic-looking inhabitants. it definitely felt like a tourist town, though, not quite real.

i almost forgot the highlight of our trip: after a long, long walk through decidedly non-touristy areas of the city, we located a cinema, wherein we watched (en francais) les bratz. all i can say is, chouette!

on the way home, i saw my first moose, calmly crossing the road (far) in front of us. it felt momentous.

the trip left me wanting to stay at more hostels; in our hostel's lobby, we gazed at a map of the many, many hostels in canada, and the cross-canada railway connecting them all. next up (i'm not sure when): montreal.

*the first time we went to chez temporel, it qualified as charming. it's widely known (based on my extensive research) to have the best croissants and coffee in the city. we were delighted with both. however, the second day we happened to be walking past and decided to go in again, since there was an available table right beside the window, opening onto the sidewalk. the waitress essentially ordered us to go upstairs. we said, oh no, we'd like to sit here by the window, and she said (imagine a snooty french accent), "oh, non non, you must go upstairs, it will be better. there is a bigger oven. you will get better service." she wouldn't let us sit in the (nearly empty) downstairs! she didn't want us to be seen -- she wanted to tuck us away in the hidden, upstairs, tourist area! so we bid her "au revoir," and went on our way.
Posted by Liz Woodbury at 8:02 PM

Sounds like an excellent trip! That waitress's attitude is what Pierre and I experienced (beaucoup) on our only trip to Quebec 30 years ago, back when our Togolese French was still in fine form. C'est pourquoi nous preferons Montreal.