i'm not able to write a post which comprehensively sums up my feelings about the store closing, since they seem to lurch randomly from one emotion to another. yesterday it seemed like a weight off my back, a relief, sort of akin to getting rid of a bunch of junk. having a yard sale! and it actually inspired me to want to sell everything in my house without utilitarian value. today i feel a little more like lying on the couch all day. never fear, though -- i am resisting the urge.

a couple of weeks ago (before the bad mojo on my camera phone) i captured these images of the cafe (and sprint, trying to be all fancy-like, has changed the way it does photos again, resulting in weird-looking pictures...anyway): 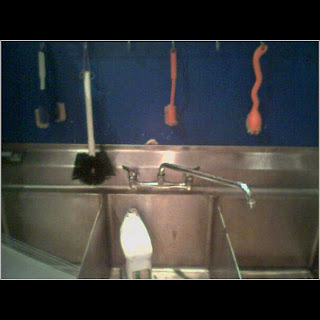 the sinks. that cool orange ikea scrubby brush on the right has been there for almost 7 years. gross! 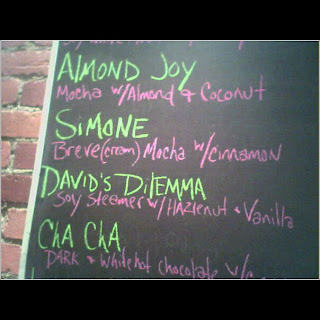 aw, the today board, with "specials" which are merely suggestions. i once calculated the total fat and calorie count for a 16 ounce simone, which is essentially a big, tall cup of hot cream. and which is named for a very small dog. david's dilema (named after a guy who sometimes lets dogs drink milk out of his open mouth) is probably the oldest drink. no, actually, i think the gravitron (three shots over a cup of ice) is the oldest. it was originally named the "ugly americano," and then changed in a burst of patriotism after 9/11. 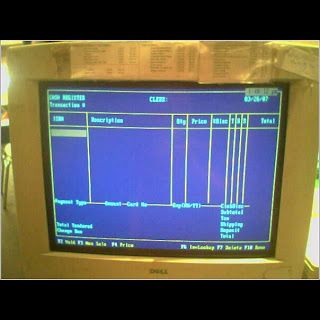 
actually, today i was not feeling nostalgic so much for casco bay books, but more for the days when bean and boo were little and we would meet friends and their kids at playgrounds, where we'd lounge around with cups of iced coffee and chat while the kids climbed things and slid down things. it's not as gorgeous a day as yesterday was, but still lovely enough to take a long walk wearing a light jacket and my cool shoes. i accompanied bean to arabica, where she was meeting her friend comrade rafa to work on a (non-school related) project. i walked back home past the (slightly sad) earth day celebration which closed off exactly one block of congress street and seemed to consist of a loud, not so good, local band and a few dozen skateboarding kids taking advantage of the empty street. then i passed a young girl in deering oaks park who was screaming (at her brother?) in a voice that sounded like "i am being brutally murdered with an axe," actually saying, "give me back my bike!" yes, that's where the playground nostalgia struck me, ironically.

yesterday, minnow got attacked by a mean old golden retriever around the corner from our house!! i took him for a quick walk around the block, and this dog ran out from nowhere and really attacked minnow, whose response was basically to cry and cry pitifully (no wolf was evident in his reaction whatsoever). a man ran out to the sidewalk and pulled the dog off of minnow. he turned out to be the next door neighbor (the dog's owners didn't know exactly what happened until m went over later to make sure the dog was up to date on shots and that he was never again allowed to wander free in the yard). it's pretty scary to imagine what would have happened if bean or boo had been walking min, and also if the neighbor hadn't been there. i rushed minnow across the street and examined him: he was bit right around his eye, with tooth punctures above, under, and to one side. he's fine, and i think ultimately it was more traumatic for me. even though the owners promised not to let their satanic dog out (it was supposedly an accident caused by the big storm, which knocked over part of their fence), i am loath to walk down that street.
Posted by Liz Woodbury at 2:38 PM

This is a great post that captures the feeling of the closing very well...I'm glad Minnow is OK, and not as badly injured as my next-door-neighbor Scottie, Lucy, whose vet bill is now over $1000, luckily all paid by the owner of our neighborhood satanic dog...I really hate it when a sweet dog like Minnow, who does nothing more aggressive than SMILE, is attacked!

Lulu wishes she had been there to protect Minnow...