easier said than done. i hate springing forward, and i'll hate it even more tomorrow morning at 5:30. 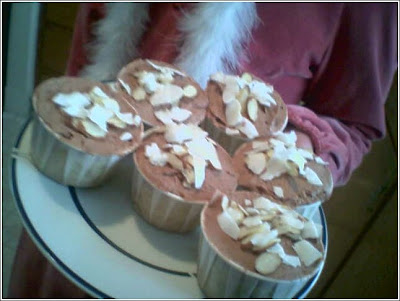 in happier news, i developed my first cupcake recipe yesterday. up til now, i've just been baking other people's recipes, sometimes tweaking them a little here and there. but these are my very own invention: almond joy cupcakes. they are a coconut cupcake with almond meal taking the place of some of the flour; a little shredded unsweetened coconut mixed in; almond and coconut extracts instead of vanilla; and chocolate chips. the icing is a rich chocolate buttercream with almond and coconut extracts, and sliced almonds and flaked coconut on top.

these were taste-tested by m, bean, and our friends ella and annie, who were visiting us for the day. i don't think boo tried them -- he's not a big fan of cupcakes with stuff on top. they were scrumptious, but i'm wondering if the cake part should be chocolate instead of just coconut... would that be truer to the concept of almond joy? no, i guess not, because an almond joy is goopy white coconut stuff with whole almonds inside and coated in chocolate. so this is good. i only made six, since they were an experiment, but i think i'll deliver a dozen to cbb tomorrow morning.
Posted by Liz Woodbury at 11:16 AM

are you just saying that to win yourself a free cupcake, hmm??

what if I also say felicitations!