why can't they do the oscars on a saturday night?

cause i'm tired!! and i still have the remnants of that pesky sore throat, although mama d was correct in her guess that it would feel much better at my parents' house in cambridge. i was well enough to see a movie with my mom; we saw breach, although it was tempting to try and squeeze in an oscar nominee before the show. i kind of gave up on that project, though, since there were too many movies (including the winner, the departed) that seemed too scary, or too violent, or something. anyway, breach was good, chris cooper was amazing, and now i like ryan phillippe better than reese witherspoon, who looked like she was made of plastic with long fake barbie hair at the academy awards last night. 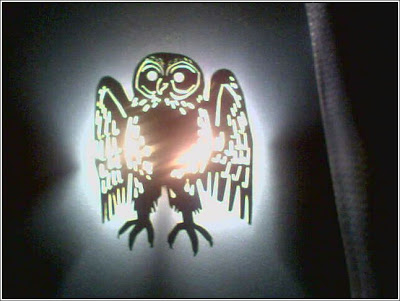 this was the first time either of us had seen an actual movie at the somerville theatre. it's very dark in there, with heavy, twin peaks-ish velvet drapes and these wild owl lamps lining the walls. we practically had the place to ourselves early on friday afternoon, until we were joined by a crazy man of strong opinions who was armed with two big boxes of little debbie snack cakes and who (among other things) removed his shirt several times during the film. and put it back on. and yelled things like "you can say that again!" 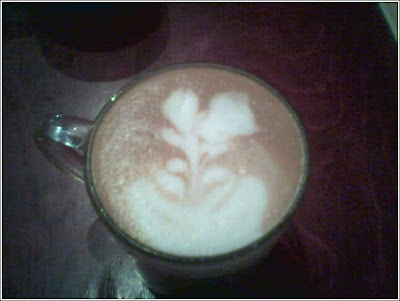 mom treated me to lunch at diesel cafe, and a lovely soy latte.

and then later we settled in at peet's in harvard square with a pot of tea. my dad met us there and we had some delicious dosas at a south indian place nearby. 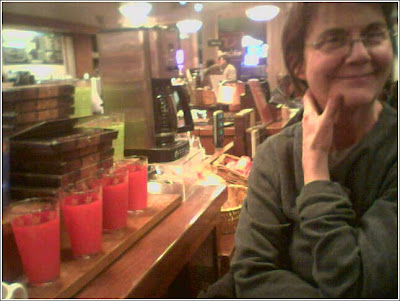 i'll let m, bean, or boo fill you in on their exciting days in new york! minnow and i were happy to see them. we wagged our tails.

mom had a weekend reiki workshop, but as soon as she was finished sunday afternoon, she hopped on the bus and joined us for our oscar party (we contemplated having an actual party party this year, but as i mentioned earlier, the oscars happen on sunday night and they last until monday morning, and this particular monday morning is the first day back on a school schedule after a blissful week off). we had pizza and chips and vegan rootbeer floats. i was happy with most of the winners, despite not having seen many of the nominated films. i went based on who i "like." martin scorsese looked like he would burst into tears if he didn't win, so i was fine with that. helen mirren had described herself earlier on barbara walters as having "an enormous bottom," so i was rooting for her. it really would have been cute if abigail breslin had won for best supporting actress, but jennifer hudson was pretty happy. etc.
Posted by Liz Woodbury at 6:09 AM

I agree about Saturday--I'm the only one here who can watch the whole program. I thought this Oscar night was the best in many years, and I liked the fact that almost everything that was nominated in multiple categories, except Apocalypto (whew!), got to win something. Glad to hear you're almost better...don't those vacation weeks fly by a bit too fast?

yeah, m and boo retired around 11 or shortly thereafter, and bean made it to midnight, but boy was it hard to get her out of bed at 6:30...

i also enjoyed it, although i wished i had seen more of the movies.

Jon Stewart has a hilarious report on the Oscars & how much better this year's host was!