the art of wasting time

i should explain, first of all, that m is one of those people who just can't grasp the beauty and necessity of a really good time-wasting activity. he's also the kind of person who doesn't understand why anyone would want to own, or partake of, a hammock. so i'm very pleased to announce that he's discovered a leisurely activity he can get utterly wrapped up in: 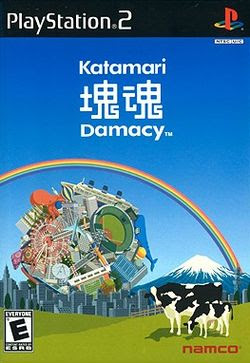 yay! it's katamari damacy! it's indescribably fun and kind of bizarre in a really japanese way. when i describe the game, you'll be incredulous that m and i spent two hours playing it last night: you're a little mallet-headed guy rolling a big ball around, picking stuff up with it. the stuff (sushi, shoes, dogs, carrots, whatever) kind of attaches itself to your ball. at first, you can only grab small stuff, but as your ball grows in size, it can pick up bigger and bigger stuff. and...that's it! that's the whole game! all the while, there's strange music in the background. take my word for it, you'd love this game.

p.s. katamari was a christmas gift from a and j to boo, i believe. that doesn't stop us from grabbing the controls out of boo's hands, though.
Posted by Liz Woodbury at 10:43 AM

we've got so many games for you to play with us next time you visit -- katamari, guitar hero, dance dance revolution... just you wait!