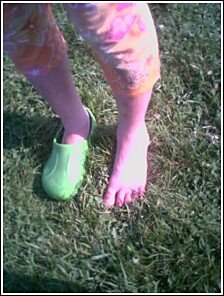 no firefighters appeared to mark your birthday yesterday, dad, but we did return to the site of the kicked-off shoes to search for them. unfortunately, crazy girl remembered removing them seaside, in a spot that the tide had since covered. even more frustrating was finding only one, apparently left behind when the tide went out...

oh yeah, also in honor of your birthday, as you know, bean got "impressions" made by her orthodontist-who-is-also-her-dentist! wouldn't it be funny if he came in and did impressions of celebrities? or of bean?? but no, actually all that meant was that she had freaky x-rays done of her entire skull and her top several vertabrae, and was given a mouthful of what looked like papier-mache and instructed to spit into the clear plastic feedbag that was clipped to her front. i resisted the cruel urge to take a photograph of these proceedings, so i think i should receive the mom of the year award AGAIN this year!

braces countdown: two-and-a-half-months to go.
Posted by Liz Woodbury at 8:16 AM

oh, boy! i bet she isn't holding her breath. happy birthday to pop!