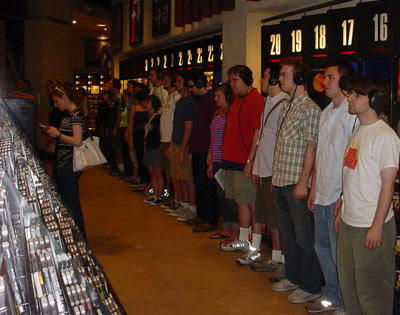 i was happily stitching away in my non-sweatshop today, listening to last week's "this american life," when i heard a story about improv everywhere, which stages these group pranks with the goal of "bring(ing) excitement to otherwise unexciting locales and giv(ing) strangers a story they can tell for the rest of their lives." so, for example, there's the "mission" where new york subway riders realize gradually that, stop after stop, the train is filling with apparently unconnected people who just happen to not be wearing pants*, until after seven stops or so, vendors selling pants for one dollar board the subway and sell them to the pant-less people (who are, by the way, wearing underwear. oh, did i mention that they do this annually, in january?).


the photo above is from the mission called "megastore," which involved appropriating every listening station in a virgin megastore, assuming robotic poses for a spell, and then, finally, a synchronized dance.


*this is reminding me of giantheads, which if you've never seen you must immediately check out. right now. click on "errata," and then "danville hustle," and you'll see what i mean. watch it twice for a surprise.
Posted by Liz Woodbury at 7:07 PM

I am wearing pants today, Thomas.

i love these people! I think they live in Cambridge!

these improv everywhere people..many times in central square, you'd swear that the random group activities had been choreographed ahead of time....