dolls of my youth 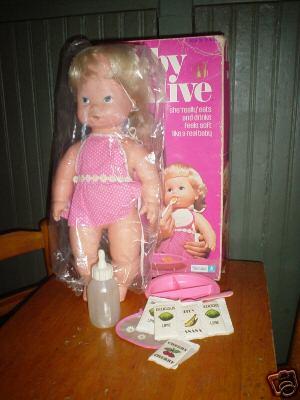 this is baby alive. she had a mouth that moved robotically, chewing food and "sucking" on her bottle. i guess not only did she wet herself, but she pooped too. so exciting! i wanted her SO BADLY. but i never got her (not until i had zoe, a much less robotic baby alive whose insides didn't get gummed up and stinky). it made me a better person, no doubt.

this is sweet mary, whose brother was adam's doll (i can't remember his name). she wore a red and white gingham dress and a white apron and had a nice, soft body.

newborn baby tenderlove! i remember opening the package (was it from a great grandmother?) and being thrilled. i don't remember how old i was, but i know we lived in kansas, and i recall eventually forgetting all about her and discovering her naked body splayed out on the driveway one morning. much later, i should add -- i adored her intensely for quite a while.

the one and only dressy bessy, and adam had dapper dan, her brother, though he denies any memory of him! they were learn-to-dress-yourself dolls, all soft and raggedy but much cuter and with more style than raggedy ann et al. i love the circles for cheeks. i think she had a button, a zipper, a snap, and hair ribbons to tie. 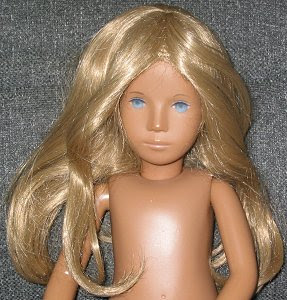 i love sasha. you may recall the incident at the yard sale this summer...her brother was gregor, and yes, he belonged to adam. they were so handsome and had a cool, scandinavian style. they cost big bucks now on ebay!! sasha is the only doll i still have, and someday i will re-attach her head and limbs to her lithe, brown body... sasha and gregor wore thick turtleneck sweaters and jeans and corduroys.
Posted by Liz Woodbury at 3:24 PM

maybe when you get sasha all recuperated, you can take her to Ikea. Don't you think she'd love it?!

I like the stroll down doll memory lane! I had Terry Lee and Tiny Tears, to name just two beloved dolls. Charlotte and Peter took Alison to the Ikea in Elizabeth NJ last Friday for some grad school furniture, and Charlotte said to me when they got home "I bet there's a little girl somewhere in this country named 'Ikea Elizabeth'"--don't you think she's probably right? I've read about a girl named Ikea, but it didn't give her middle name. Now, if that name isn't reason enough to go for another child, I don't know what is!

or maybe another doll...

or maybe another dog...

I think you loved Mary the longest, by the way..and wasn't her brother's name Joey? Wonder if Adam remembers him?

oh yeah, joey! does adam still have manny? (best name ever, for a "man doll")

yes, manny was great. one of my fellow employees at border's was named manny & i always thought of manny the doll when i heard his name...

what about isaac's doll, Baldy?

yeah...and zoe had one too. neither of them took to dolls, as you know. they seemed to think the idea of carrying around a small pretend person was just odd.

unlike carrying around a small pretend lion !

yes, i loved my lions.