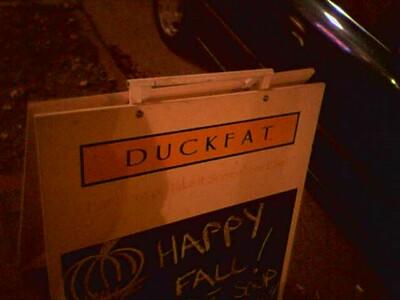 i've been wanting to try duckfat ever since it opened about six months ago. tragically, they fry their belgian-style frites in...duck fat. however, they offer many tasty treats not fried in duck fat! such as a delicious tuna panini, a chevre cheese plate with apple slices and pieces of thin, grilled bread to eat with the cheese. and a cunning little wooden dish of nuts.

before our meal, we went to see everything is illuminated at the nickelodeon. it was pretty good, though somehow a little disappointing, nowhere near as transcendent as the book. the best thing about it was probably eugene hutz, who played alex the translator. he is in a "gypsy-punk" band called gogol bordello -- they're featured on the soundtrack, which is maybe the other best thing about the movie!
Posted by Liz Woodbury at 10:05 AM